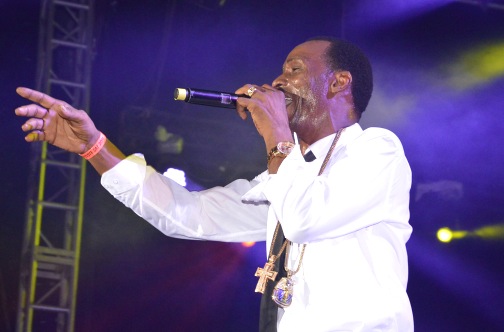 FOR many who attended Reggae Sumfest’s final night on Saturday, it would be the performance by singer Sanchez that was the evening’s highlight.

Coming on stage just after 2:00 am, the artiste — who came to prominence in the late 1980s and was celebrated for his clear tenor voice as he was for his ability to deliver brilliant cover versions of popular tracks — was a man with a mission at the Catherine Hall Entertainment Centre in Montego Bay, St James.

Dressed in a pale blue suit, Sanchez simply delivered a steady flow of hits from the opening note.

Lonely Won’t Leave Me Alone, Missing You Now, For You, Love You Too Much, Bring You Sweet Love, Never Gonna Let You Down and more simply oozed from the singer, in the same way it did when he appeared at Rebel Salute in January.

The audience was then thrown back to the 1980s when he was joined by deejay Flourgon for Love Mi Lover Bad. Sanchez would then change the era, opting for more recent tracks to cover — Ed Sheeran’s Thinking Out Loud andAll Of Me by John Legend.

The work of veteran reggae acts was also shown love by the man born Kevin Jackson. He would then wrap up his performance with a hand-clapping, foot-stomping gospel set which included Real Real, What a Mighty God We Serve, I’ll Fly Away, Oil In My Lamp, and Across The Bridge. His clear voice would ring throughout the park with Josh Groban’s

You Raise Me Up capping his presentation.

It was another singer and the festival’s penultimate act that would come close to Sanchez. The morning sun began to peep through when Tarrus Riley made his presence felt. Never known to deliver lacklustre sets, Riley, along with his Black Soil band with musical director Dean Fraser, had no intention to start that trend.

So, it was vintage Riley with nothing but the hits. His festival-weary audience would draw strength from this performance. For good measure, the singer threw in cameos from his fellow artistes Iba Mahr and Zagga. The entertainment quotient rose with a walk on by Beenie Man and Popcaan, who in a display of love and unity freestyled with Riley much to the delight of the audience — many of whom may have missed the deejays’s performances on Friday’s Dancehall Night.

Fresh off the success of his Grammy-nominated album Acoustical Levy, veteran Barrington Levy was another bright spark in the night’s performances. His distinctive voice has not lost its quality with the years and, as a result, he was treat to listen to. The fresh musical arrangements on some of his classics added to the experience. He would deliver all the hits expected of him —

Living Dangerously, Prison Oval Rock, Too Experienced, and Murderer, which saw the first Jamaican performance of this collaboration with Beenie Man. Levy would add some international flavour to his set by calling on rapper Shyne for the track Bad Boyz, and despite being laced with profanity, the presentation was well received. Tracks such as Everyday I Love Her a Little Bit More, Black Roses, and Broader than Broadway closed the set at 4:15 am.

Among the big names on the bill was another veteran act: Super Cat. Not a regular on the local stage, many patrons came out to hear the Don Dada’s anthems and he delivered.

Vineyard Style, Dem Nuh Worry We, Under Pressure, Boops and Tan So Back all found favour.

Just like Friday, the stronger performances hit the stage just after 11:00 pm. On Saturday, it was Nature who opened the floodgates of strong sets with an energetic and emotional performance. Christopher Martin was in a working mood when he hit the stage and was intent on giving his audience all the hits he is known for and then some. Busy Signal was a victim of the time keeper and could be heard protesting after his performance. His set was, however, strong especially his opening tracks which included Missing You, One More Night, and

The task of bringing the curtains down on festival was up to conscious crusader Luciano, who has not performed on a Reggae Sumfest stage in a number of years. However, with the strength of earlier sets and with the morning sun taking its place in the sky, the majority of the thousands who went to the festival were making their way through the exit gates. This did not stop ‘The Messenjah’ from dropping the great music he is known for, bringing the event to a close near 7:30 am.