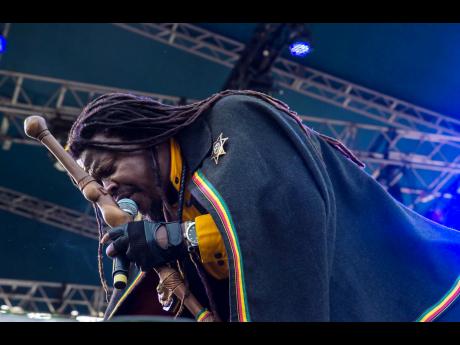 Under the new regime and changes made to the Reggae Sumfest model, International Night was replaced by Reggae Night, a bet placed on how powerful and magnetic Jamaica’s own music would be.

That bet returned an investment of cultural and artistic pride as reggae ruled on the final night of the ‘World’s Greatest Reggae Festival’, Reggae Sumfest, last Saturday night.

A fire-breather foretold the electricity Tarrus Riley would ignite on the Catherine Hall stage. Needing no warm-up due to the atmosphere, Getty Getty and Riley’s version of Michael Jackson’s Human Nature were his way of introducing the reggae morning.

Wearing white with hints of off-white, each transition mirrored his immaculate delivery. Indicating his intentions of a flawless performance, Riley called for the Lion Paw, coupled with pure hearts in the morning light.

In a 2016 version of the movie, Three The Hard Way, special guests Beenie Man and Popcaan joined him on stage, each receiving encores louder than the last, prompting the singjay to sing to Jah, asking that he ‘Never Leave’.

Designating time to the females, he pulled for two of his chart-topping love songs, I Will Stay With You and She’s Royal. Syllable for syllable, word for word, the positive vibes journeyed across the venue.

Master saxophonist, Dean Frazer, a staple on Riley’s musical team, exhibited mastery, closing the set with a solo which could have made him a stand-alone act for Reggae Night.

Riley’s exceptional performance was matched by Sanchez, a timeless and seemingly ageless artiste, who serenaded his loyal followers with Hallelujah and One in a Million. Air horns and voices could be heard throughout the Catherine Hall complex as he belted, Lonely and Pass Di Dutchie. With Sanchez, the difference between hits and classics was indiscernible, as each song, including Missing You and Love You Too Much were met with a chorus.

Though it was no longer International Night, Sanchez’s renditions of Thinking Out Loud (Ed Sheeran) and All of Me (John Legend) did justice to the originals. Dennis Brown, Bob Marley, Gregory Isaacs, Sugar Minott – all were fair game. Returning to his own catalogue, Living Up touched each person present. Ever the medley connoisseur, gospel ushered his set to the end, with the early morning Sunday school in session. True to form, Sanchez closed as strongly as he opened, turning a one-man performance into a group singalong.

Making a long-awaited return to Sumfest, clad in a white suit that shone with or without light, Barrington Levy sang Living Dangerously, which demonstrated how loud the audience could get. Seedless, a song about his marijuana preferences, was co-signed by fellow weed enthusiasts. Like Any Other Man was a decree that one could not help but empathise with. When he pulled for Too Experienced, his vocals provided support. Making a cameo appearance, the Doctor, Beenie Man joined Levy on stage for Murderer.

Levy’s Black Roses and Broader than Broadway were a reminder that decades later, his music still resonates.

Reggae Night was a night of stars, and Christopher Martin, one of the many, warmed the crowd with Can’t Love Me Now, receiving a resounding response, followed by I Wanna Give You My Love, depicting the plight of a woman who retaliates after being cheated on. While transitioning to Cheater’s Prayer, it was impossible to not take note of his vocal prowess, as he left no note unturned. Martin completed a medley of songs from legends, including Garnet Silk, before reminding the audience that he was a Big Deal. Martin closed his act with a litany of old soul songs.

Designated ‘Hothead’ Busy Signal, commenced with melodies cooler than a seabreeze in December. Coming out with One More Night, followed by Night Shift and Miss You, the audience would not permit him to sing on his own. Dressed in a smart plum and black suit, an outfit so sharp it is usually reserved for dancehall night, Busy’s introduction intimated that Reggae Night was just as important.

Busy fervently Stepped Out, getting a resounding forward for his first hit, followed by Full Clip, one of his many collaborations with Mavado. Nah Go a Jail Again described the adverse conditions he would never return to, and the audience sang as if they had experienced similar prison terms. Amazingly, Busy performed the first verse of American rapper Eminem’s Lose Yourself and used the same riddim for These Are The Days, a seamlessly impressive transition from hip-hop to its purported origins; reggae.

Pon Di Edge, Stamma and Bedroom Bully were dedicated to the females, and he danced as such. With no interest in being advised that his time was limited, Busy fanned the production team off to a resounding ovation. The loudest response came before he could perform Forever Young, when his time was cut. Fans sent him off with earned recognition for his performance.

Seeming more like a blast from the past, Supercat, who has not only influenced many other artistes, but because of his wordplay on each song is arguably one of the reasons many people fell in love with dancehall, took the stage at about 4 a.m. on Sunday.

Them Nuh Worry We saw the audience try to keep up with the lyrical prowess, and Easy Mr Cat further tested their ability to stay with him. The most familiar song performed was See Boops Deh, a term still used in today’s colloquialisms for a man who is a sucker for spending money on women.

Although the crowd was not fully ready for him to go, Supercat closed to a round of applause.

At 6:45 a.m., Luciano opened his closing act of Reggae Night with a bang. The occasional plumes of marijuana permeating the atmosphere, the reggae artiste, born in Montego Bay, did Sweep over my Soul, exuding an energy that was far more elevated than the toy drone, which hovered above the show, recording history.

Reminding the audience that We Are All in This Together, he called for an end to the recent increase in violence. Just in case the country has forgotten, Luciano used Ulterior Motives, one of his many classic messages, as a reminder. Moving with great profoundness, Luciano’s performance inspired a disabled patron to drop his crutches, dancing on one foot in jubilation.

Never Give Up My Pride, after all of these years, still had the intended impact as the show ended fittingly.

Saturday night’s acts were incredibly good, and Nature, who appeared much earlier in the set, invoked that he was a warrior by nature.

Nicky Silk, eerily sounding like Garnett of the same name, performed renditions of his songs, including Hello Mama Africa. The crowd was particularly receptive to this flashback.

Dann I, with the roots reggae, channelled the theme of the night’s event. Earlier showings by D-Medz, Adahzeh, and Anavah Love Jones commenced the festival’s successful opening acts.