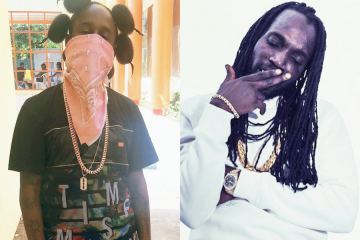 Dancehall heavyweights Mavado and Popcaan are currently feuding, according to reports.

The rumoured beef started in earlier this month when the former Portmore Empire protégé released a new single called “World Cup,” which many have labelled as a diss track and response to Mavado’s “Big League.”

“Wi nuh know bout league cause we name World Cup/ and the p***y dem nuh like when wi hotta dan thermos / they doah like when ghetto yute f**k the world up / weh them ago do now when the Benz pick them girl up,” Popcaan states in his song.

The song, produced by NotNice, has already racked up thousands of views on YouTube.

Mavado then released a new single “Go Fi Dem” on the Summer Beach Riddim, which many believe is a subliminal response to Popcaan’s new track.

“A wa do you likkle chicken / You think mi war finger licking / Is a gyal mi use trick him / When time she hug up and a kiss him / Anyweh wi aim, deh suh shot a kick him / Freak bwoy a you face gyal a sit in / Yeah the fire hot in a the kitchen / Shoot dem fi 3 life pippin,” Mavado deejays in his song.

The alleged feud got even more intense last week after the ” Up Like 7″ deejay took to Instagram to throw words at his rival.

“Some little artist boy fi know dem bloodclatt self don’t make mi of to get dark because dem know how it will go pussy when you talking about the don have respect like you talking about your mom ahah dem dead to me don’t make it start just know dat,” Mavado wrote on Istagram.

In the meanwhile, Popcaan’s manager, Sharon Burke, says she is unaware of issues between Popcaan and Mavado.

Despite the possibility of a new feud between the two artists, this would not be the first time that they would be at odds. For years, Mavado feuded with Vybz Kartel who headed the Portmore Empire of which Popcaan was a member.

However, in 2014 the unthinkable happened when Mavado was featured in the remix of Popcaan’s Everything Nice.