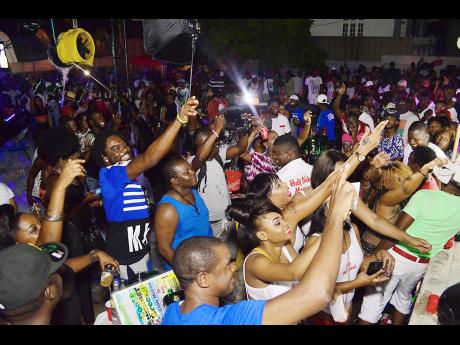 Wanda, the Canadian-based promoter whose popularity swelled with the staging of the Oh Canada boat ride, saw his reputation rise another notch as he staged his promotion team’s third Foam ‘Fette’ party.

The event, held in association with Rasta Connection, was a massive hit at the Frisky Friday headquarters in Nine Miles Bull Bay, St Andrew.

With liquor and music at their disposal, it was a chance for female patrons to get on bad, and back it up. The energy levels at the party soared as ladies in bikinis and skimpy outfits could not get enough of the foam pit. They danced, wined, and sprawled as if they were in their bedrooms. They also got wet in the pool and water slide.

Promotion teams from the Corporate Area and as far as Morant Bay in St Thomas came out to endorse their up-coming parties and also to take note of the activities that unfolded. “The place was filled to capacity and it was pandemonium inside the venue. We promised an epic event and we delivered,” an ecstatic Wanda said.

A female patron had this to say: “You only live once, so I come to party. I don’t come to watch anybody. I just do my thing. I enjoyed myself to the max”.