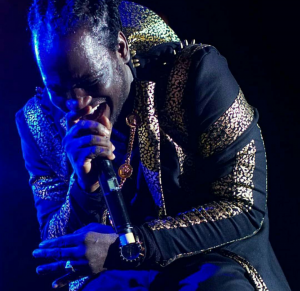 Musical and triple brand ambassador, I-Octane, always seems to effortlessly hit the perfect note, whether on or off stage.

Coming from a scintillating performance at the recently concluded Reggae Sumfest in Montego Bay, the young veteran, who created history by closing the festival two consecutive years – 2013 and 2014 – is just as focused now as when he started his impressive  journey close to a decade ago.
The Rastafarian reggae-dancehall artiste admits that this year’s Reggae Sumfest was very special to him, one reason being that for the first time in three years he performed during prime time to a crowd that was already wholly energized and super ready for his commanding performance.
And, of course the fact that he and Bounty Killer proceeded to ‘tun ova’ Catherine Hall with an unrehearsed but superb performance of their collab “Bad Mind Dem A Pree”, surely added to his delight.
“That performance was completely spur of the moment,” a smiling I-Octane, who is brand ambassador for Digicel, Busta and Golden Eagle shoes said. “I had finished entertaining my fans and was already off stage when Bounty indicated to me his intention. At that point I just hurried back on stage and started the song, and then Bounty picked up,” he explained.
And, as they say, the rest is history. In fact, so historic was it that Alliance boss, Bounty Killer did something that was out of character. Right there on stage in front of one of the biggest crowds ever assembled for Reggae Sumfest Dancehall Night, Bounty praised  I-Octane and told Digicel that the company were indeed fortunate to have such a great artiste as their official brand ambassador.
I-Octane, who has been hailed as one of the most talented next generation of reggae troubadours, has amassed an impressive slew of hit songs throughout the years and has skilfully positioned himself as the flag-bearer of culture, reality and message music, while maintaining a strong appeal in the dancehall where his songs have become anthems.