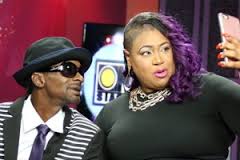 Gully Bop found himself behind bars in New York City yesterday as his career continues a downward spiral.

The “Wuk Off A Mi” deejay was booked in NYC for robbery and domestic violence after having a dispute with girlfriend A’Mari. Sources told Urban Islandz that the deejay is still behind bars at the time of this publication and will miss a concert in Guyana.

“They had one of their usual episodes and A’Mari called the cops on him,” sources told us. “She also told cops that he took money from her and was about to leave the country.”

Gully Bop, who was scheduled to leave New York on a flight to Guyana yesterday, was booked on battery charges, a misdemeanor.

The on-again off-again couple has had a rocky relationship from the get-go with A’Mari regularly posting videos on social media bashing Gully Bop.