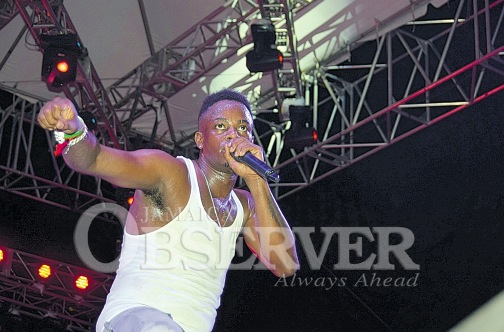 ONCE inside the Cayenne Beach — venue for Magnum Dream Live Concert in Negril — the long queues at the Redemption Centre and the bumper-to-bumper traffic on the Hip Strip were quickly forgotten.

In an evening filled with good performances, dancer-cum-dancehall deejay Ding Dong and his Ravers Clavers crew stood tall with their high-energy set.

The Nannyville-born entertainer created a dancing frenzy with songs including Coolest Summer, Shampoo, Nuh Linga, Lowe Me Nuh and Holiday. Before entering into the VIP area to interact with his fans, Ding Dong invited an Italian couple from the jam-packed venue on stage to to show off their versions of the latest dances.

After Ding Dong’s performance, it was time for the self-proclaimed ‘Stage Show Boss’ Spice. As anticipated, she and her skimpily clad dancers had the audience’s undivided attention with her raunchy lyrics, acrobatics and sexually provocative dance moves.

It was close to 4:00 am when Bounty Killer took the stage. His songs like Wutliss Bwoy, Sufferer, Living Dangerously and

Summertime were well received. Never one to mince words, he shared his outlook on life before he churned out the lyrics to

Eagle and Hawk, Can’t Believe Mi Eyes, Look Into My Eyes, and Orginality. He also shared his set with Alliance members K Queens and his son, Major Mijer.

He then made way for the ‘Unruly Boss’, Popcaan, who was a fitting end to Dream Live Concert 2016.

While the majority of Dream Weekend supporters enjoyed the opening event, there were a few who were left disgruntled.

“It is really unfair that I didn’t get a chance to see the concert. I travelled for hours to get to Negril only to realise that the Redemption Centre had already closed. I had already spend thousands of dollars to purchase my ticket and was told at the gate that I could not gain entry to the venue because I did not have an armband. I was then told I had to purchase a ticket for the night’s event which I refused to do. Things should have been set in place for all the persons that would have missed redeeming their passes as there is proof that we already purchased our tickets,” a female complained to the Jamaica Observer.