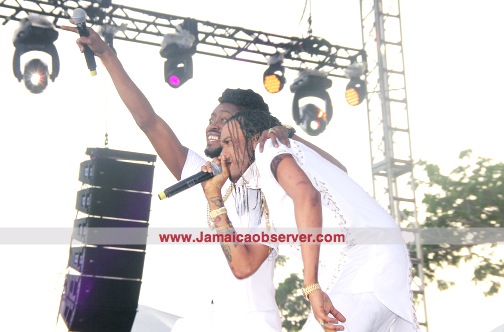 THE jury is still out on whether this was the biggest dancehall night ever at Reggae Sumfest. But what is indisputable is that a massive audience turned out on Friday to take in the first of the two live performances at this year’s festival.

New festival chairman Josef Bogdanovich called it the biggest ever dancehall night, hinting that there was between 15,000 and 20,000 people inside the Catherine Hall Entertainment Complex in Montego Bay.

“It is just awesome. They say it’s the biggest night ever…I guess it’s bigger than Kartel, he was the biggest. I am thinking about 15,000 to 20,000 will be here before the night is done. They are all coming to see Bounty, Beenie and Popcaan… The vibe is wonderful. For next year, I am looking to find international sponsors. The sponsors here have a limited budget based on my vision for more expansion to make it a solid festival, and what a showing we are having tonight which shows what can happen for reggae music,” he told the Sunday Observer.

Meanwhile, former chairman-turned-producer Robert Russell was reluctant to nail down a precise number of patrons, opting to wait on gate receipt figures. But he was clear it was one of the biggest crowds he had seen at the festival on this specific night of performances.

“2016 dancehall night is one of our best, when we get the figures we will be able to say definitely. I have been taught not to estimate crowds but we have a good audience, which is definitely better that last year and the year before,” he said.

Numbers aside, in the face of no clear-cut front-runner in the local dancehall ‘game’, the fraternity truly pulled out the stops to deliver a good showing of itself. However, at the end of the night, it was the veterans Bounty Killer and Beenie Man, perennial favourites Romain Virgo and I-Octane and current campaigners Dexta Daps and Nesbeth, who got the best out of the thousands who stood for hours inside the park.

The warlord, Bounty Killer clad in his trademark full black, was in his element for the duration of his 40-minute set. It was classic Bounty dropping the hits of his more than 20-year career. He has long made known his disappointment with the organisers dropping the international night title, noting that there are enough reggae and dancehall acts who have made it on the international stage.

With that, he launched into a string of hits he has done which made inroads on the international market. Vocalist Aisha Davis was brought in to lend her vocals to

Earlier, it was an emotional performance from Nesbeth which had some, including the artiste, teary eyed. He dedicated his performance to his late wife. With his children wearing full white and carrying lit candles in the background and a photo gallery of the couple’s wedding displaying on the jumbo screens, Nesbeth crouched on the stage monitors and delivered a touching rendition of

Gone Too Soon, a ballad he wrote for his wife whom he described as his real inspiration. This would segue into his monster hit

My Dream, which helped to change the mood in the park and had the audience cheering wildly.

‘Mr 7 Eleven’, Dexta Daps was not in the ‘bag a long talking’ mood from the moment he stepped onto the stage at 3:30 am, announcing “ less talk is the best talk!”

With that, he went into a workman-like performance dedicated to the predominantly female audience and they loved every moment of the 25 minutes he gave them. The hits including

Ever since his introduction to the Jamaica audience as the winner of Digicel Rising Stars, Romain Virgo has always been a crowd-pleaser. In a lineup of deejays, the St Ann singer’s music added a slice of diversity to the night’s offering. His personal mantra of performing each show like his last was clear to see as he seemed to have put his everything into each track.

In under 10 years, dreadlocked singjay I-Octane has carved out a name for himself. Having closed dancehall night in the past, he is widely regarded as a staple on the Sumfest line-up and one who consistently delivers masterful performances at each showing. Declaring he was not seeking the accolades for his performance, what he demonstrated on stage is worthy of commendation as he too understands what his audience needs and put out there for them to enjoy.

It is rare that King of the Dancehall Beenie Man is dismal on stage. Charged with closing the night, in his inimitable style, he was able to arouse his audience and have them singing and waving to his music at well after 6:00 am. With a deep catalogue of hits he was able to draw on this arsenal, just shoot off the opening lines and have his audience pick up with rapid fire.

The night’s openers including Magnum queen Clymaxx, Montego Bay’s Ricky Teets, Dre Zee, would serve their purpose in keeping the early birds entertained, but it was the entry of Devin Di Dakta which signalled the start of star time at 11:00 pm. He is truly demonstrating his growth as an artiste and was determined to make his mark on his very first Sumfest stage.

Over the years, the performance by female deejay Spice has been eagerly anticipated. This year, while she was entertaining, she failed to up the ante and top her previous productions.