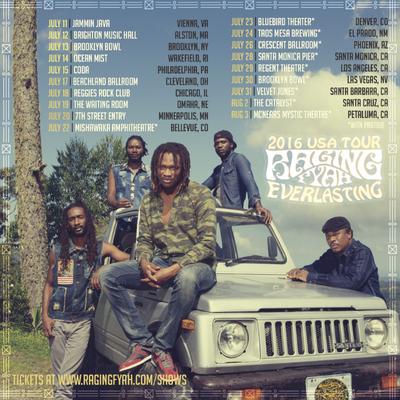 Reggae band Raging Fyah took the stage to a sold out crowd of eager patrons at Skyline Levels in Jamaica and delivered a memorable performance of songs from their 3rd studio album “Everlasting”.

By all accounts and rave reviews the band dominated the stage and had the crowd singing along to the sweet reggae sounds and melodious rhythms of the billboard charting album with the title track “Everlasting”, “Getting Dread”, “Dash Wata”, “Ready for Love”, “Raggamuffin” among other captivating songs.

As mentioned to Anthony Miller, “I think this is our best work so far there’s a song for everybody on the album” Leaving the crowd wanting more,Raging Fyah left an Everlasting musical impression.

Source: Raging Fyah Leaves Everlasting Performance at Home, Heads to Europe and US for Musical Journey