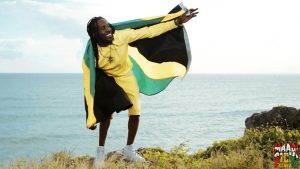 Over the weekend Reggae Firebrand Nesbeth was the toast of the town when he invaded Toronto, Canada as headliner for a concert in the Ontario capital alongside fellow Jamaican entertainer Gyptian.
Arriving in their droves amid the cool weather conditions, the Canadian fans were treated to a musical feast as the ‘My Dream’ singer served up a masterful set despite it being his inaugural performance in that city . During his set, Nesbeth showed noticeable growth taking the audience on a compelling journey with his growing catalogue as he wove a story encompassing his life’s greatest perils and triumphs, much to the delight of the multitude. Unraveling classics such as So Let It Be, Board House, Gunz Out, Friend For Sale and his more recent offerings ‘Taste Victory’ and ‘Ole Gangalee’ the Trench Town native soon calmed the charged crowd with the somber ballad ‘Normal Day’, a moving tribute to his beloved wife, he also used the occasion to talk about the recent passing of his mother and sister both of whom were very instrumental in his life.

With noticeable tears flowing freely among some members of the audience Nesbeth then segued into his monster hit ‘My Dream’ at which point the crowd erupted returning to a joyful state. Closing out his set with an inspirational message of gratitude to the fans Nesbeth was quickly ushered backstage only to be besieged by the horde of fans in the lobby requesting photo ops and autographs.